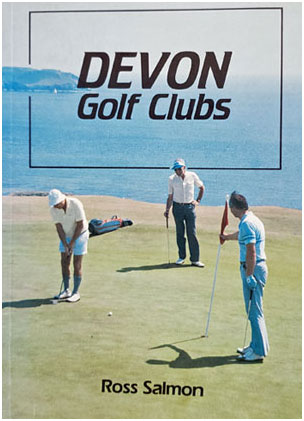 The distinguished writer, broadcaster, explorer and keen amateur golfer, Ross Salmon, played hundreds of rounds of golf during his 32 years reporting for BBC radio and television. He played every course in Devon and organised some of the biggest Celebrity Golf Tournaments ever held in the West Country.

Here’s what he had to say about Great Torrington:

“Torrington is not a well known or fashionable golf club, it must be said, but it has a very long history.

Back in 1985 a few local people decided to take up this new game of golf; no doubt inspired by the success of the Royal North Devon Club.

They built an unpretentious nine-hole course where the Torrington Bowling Club now stands.

The golf club did not exactly flourish, but the very keen few who were desperate to play golf made use of the simple course.

There were no benefactors and not much money available so everything had to be done on a limited scale.

Those early pioneers pinned their hopes on renting a piece of the Great Torrington Commons; open heathland near the town, which was in the care of the Commons Conservators. In 1932 they gave the golf club permission to lay out a nine-hole golf course on the top of Furzebeam Hill.

It was pretty rough land with acres of thick gorse bushes, a lot of trees and severe slopes leading up the hill and down the other side.

The enthusiasts worked hard to clear the land, put down better turf for the greens and built a rough and ready golf course. There were 12 members to start with, but once there was a golf course in existence there was a spontaneous support.

At first there was only a small wooden hut for changing your shoes. There was no water supply; not even any toilets. Mr G.S. Green the present club secretary told me that they cut down the long grass and some scrub, and built a rough shelter for the ue of lady members. It was that primitive.

Like every other golf club in Devon, Torrington slowly began to flourish, and, in the late 1970s, they registered with the Devon County Golf Union.

By 1980 the club had a membership of 350 with a fair number of holiday visitors adding to the income, so they built their first small clubhouse. It was opened in 1982 on the 50th anniversary of the Furzebeam Hill Golf course, and now the club is really developing.

The present nine hole course is cut through wide swathes of gorse, past scattered clumps of trees and luxuriant scrub, but the biggest natural hazard of all is the sloping ground on the top of the hill.

Almost all the fairways and the greens have a distinct slope, first one way and then the other.

In fact, the second hole [now the 4th] is just about the most difficult on the course, because of the difficult terrain. It s a 230 yards par 3, but the sloping green is almost impossible to hit, because it is narrow and sculpted out of the side of a steep hill.

It was not until 1984 – 52 years after the hole was laid out – that Peter Smith, a local member, became the first man to get a hole in one at this difficult hole.

Golf at Torrington is more like a game that was first played in Britain, and it is a unique experience which more and more visitors are coming to enjoy.”